It’s official, Danny the Turkey has been Pardoned by TN Ag Commissioner! The Franklin Farmers Market 3rd annual Pardoning of the Turkey was held on Saturday, November 18th sponsored by Herban Market. The star of the show, Danny the Turkey of Earth’s Advocates Research Farm, was not at all nervous about whether or not he would be pardoned. Instead, he sat royally on his bale of hay as children and adults took the opportunity to pet and hug him. Danny is a pro at being the center of attention and children gathered around him for a chance to pet their first turkey. Visit this link to view the Photo Gallery of Danny’s pardoning. 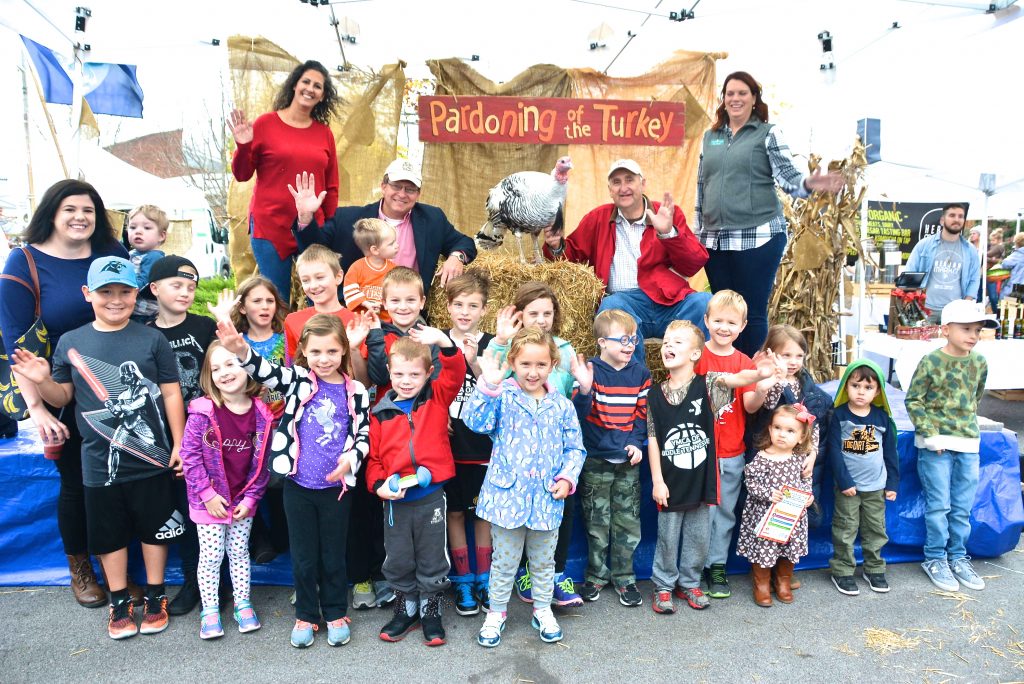 Second Graders from Liberty Elementary School wrote over 90 letters to the TN Department of Agriculture’s Commissioner Jai Templeton on Danny’s behalf and delivered them to the Commissioner asking him to pardon Danny for Thanksgiving. Commissioner Templeton was happy to oblige and graciously granted Danny clemency in front of hundreds of market attendees. 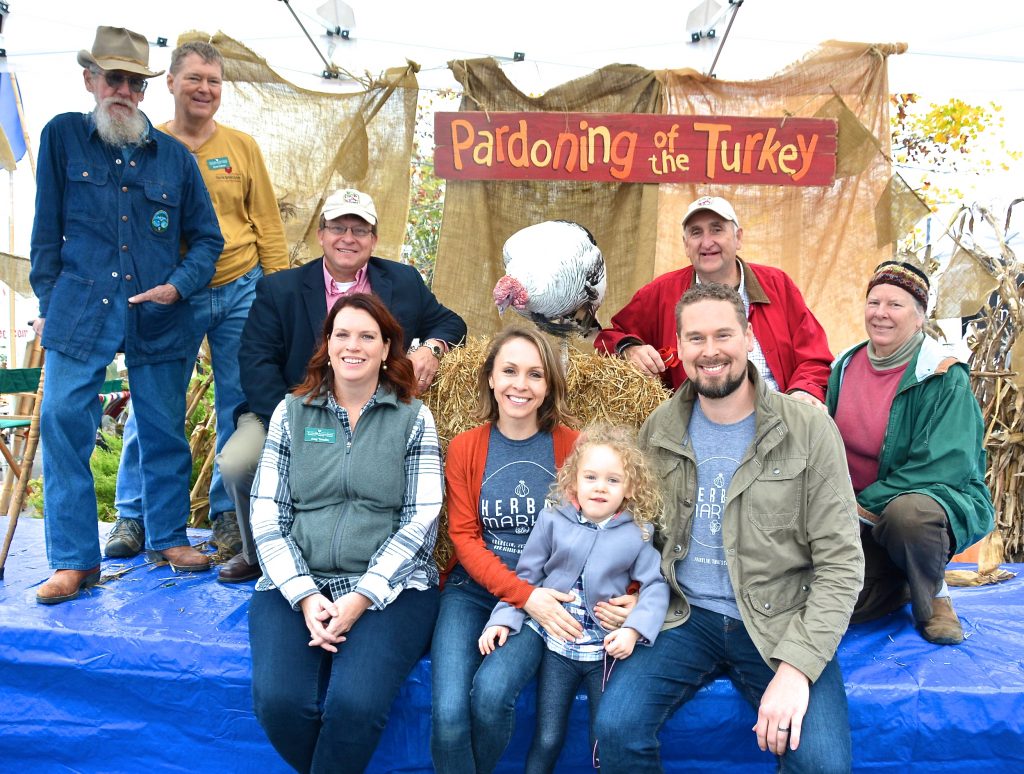 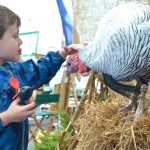 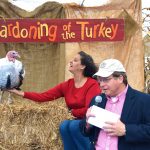 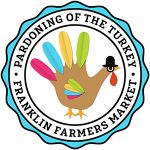 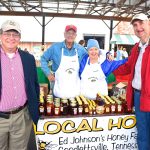 Assistant Commissioner of Agriculture, Ed Harlan, delighted the crowd with turkey facts. Being a farmer himself, Ed gave insight into the farmers who provide us with delicious Thanksgiving foods. Ellie’s Donuts provided donuts for the children who wrote letters to the Commissioner and the fun day was complete with many “selfies” taken with Danny. It’s not everyday that one can say they took a picture with a Royal Palm Heritage breed turkey, but the customers of the Franklin Farmers Market can check off that one on their bucket list! 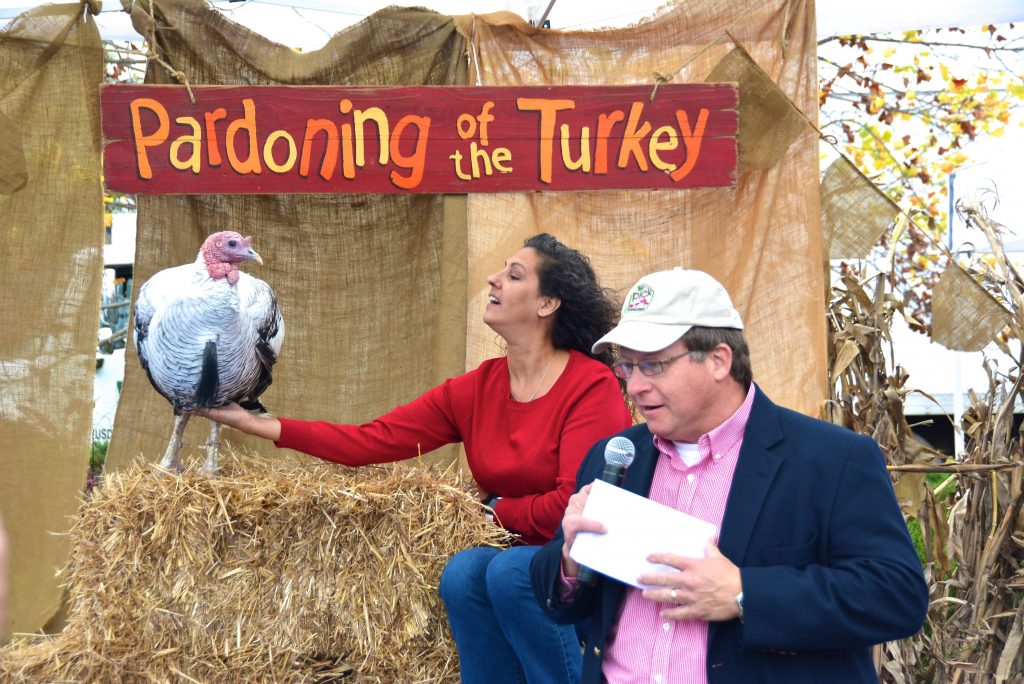 At this very moment Danny the Turkey is being Pardoned by TN Commissioner of Agriculture Jai Templeton to the delight of Liberty Elementary School Children and residents of Franklin, TN

The Franklin Farmers Market is open 52 weeks a year. Gone are the days of markets closing down in the winter months due to no produce. The farmers at the Franklin Farmers Market grow year-round thanks to crop row covers, hoop houses and green houses. The meat producers provide beef, pork, chicken, lamb, turkey and vegetable producers have leafy greens, winter squashes, broccoli, cauliflower, sweet potatoes, lettuces and more. It’s not hard to eat seasonally and locally right here in our hometown! This Thanksgiving we are grateful for the farmers who provide us with healthy, locally grown food to nourish our bodies and we are thankful to live in such a wonderful community of Franklin, TN. 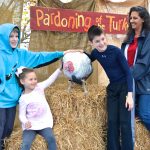 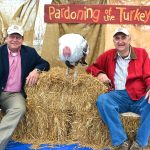 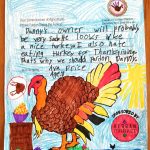 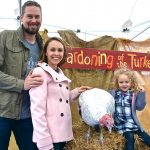 The Franklin Farmers Market is open year round with winter hours of 9am-12pm November-March and 8am-1pm April-October The market is located at 230 Franklin Road behind the Factory. 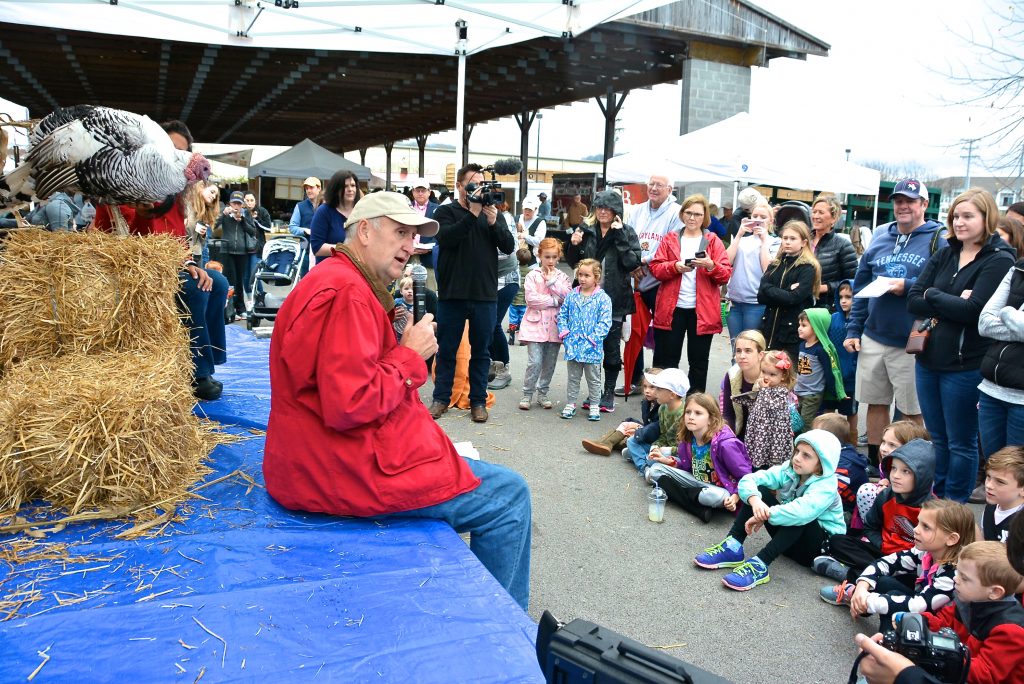 TN Assistant Commissioner of Agriculture Ed Harlan visiting with the children of Liberty Elementary School about Danny the Turkey before Danny is pardoned.

The Franklin Farmers Market 3rd annual Pardoning of the Turkey is Saturday, November 18th at 10am sponsored by Herban Market. This fun, family oriented event is centered on our market turkey, Danny, of Earth’s Advocates Research Farm. Children will be delighted to meet and pet the Royal Palm Heritage breed turkey that will be pardoned by the Assistant TN Commissioner of Agriculture, Ed Harlan. 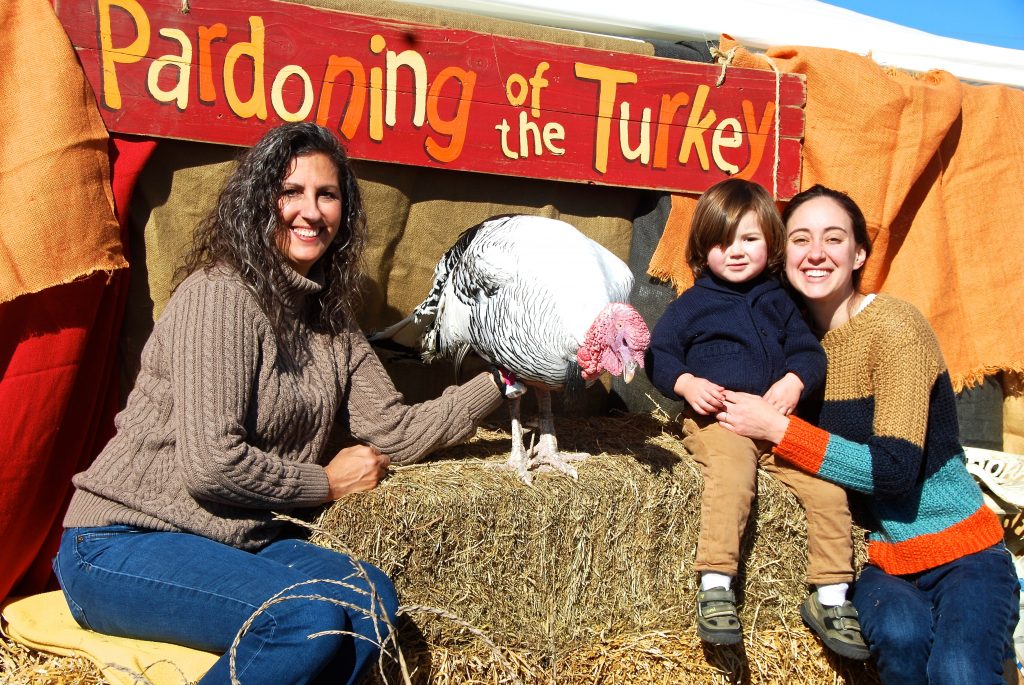 Friends and Family can pose with Danny the Turkey all market long!

Children are invited to download this coloring sheet and write a letter to the Commissioner of Agriculture asking him to grant amnesty to Danny for Thanksgiving. Deliver your letter by 9:45am to the market information tent for a chance to win a farmers market prize! There will also be a coloring tent set up for children visiting the market who want to color and write a letter on Danny’s behalf. 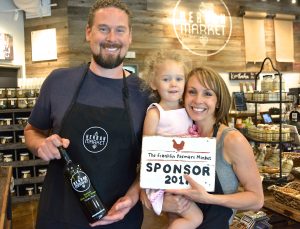 The November farmers market is full of beautiful produce you may not know is still in season, just in time for Thanksgiving! November 18th is the perfect time to buy your sweet potatoes, broccoli, cauliflower, leafy greens, radishes, turnips, pumpkins, winter squashes and more! Some farmers will still have cherry tomatoes available to go with the lettuce! Bring your children to the market as we give thanks to the farmers and teach them where our food is grown and enjoy our wonderful celebration of Pardoning of the Turkey! Thank you Herban Market for sponsoring this fun event for kids, families and friends. We look forward to your free Olive Oil tasting at the market!

“The Franklin Farmers Market has always done an excellent job of connecting local families to local farm foods. I’m especially pleased to be a part of this special event because it extends that connection to school children who are learning about the importance of agriculture in our lives.”  — Tennessee Commissioner of Agriculture Jai Templeton

The Franklin Farmers Market is open year round with winter hours of 9am-12pm. The market is located at 230 Franklin Road behind the Factory. 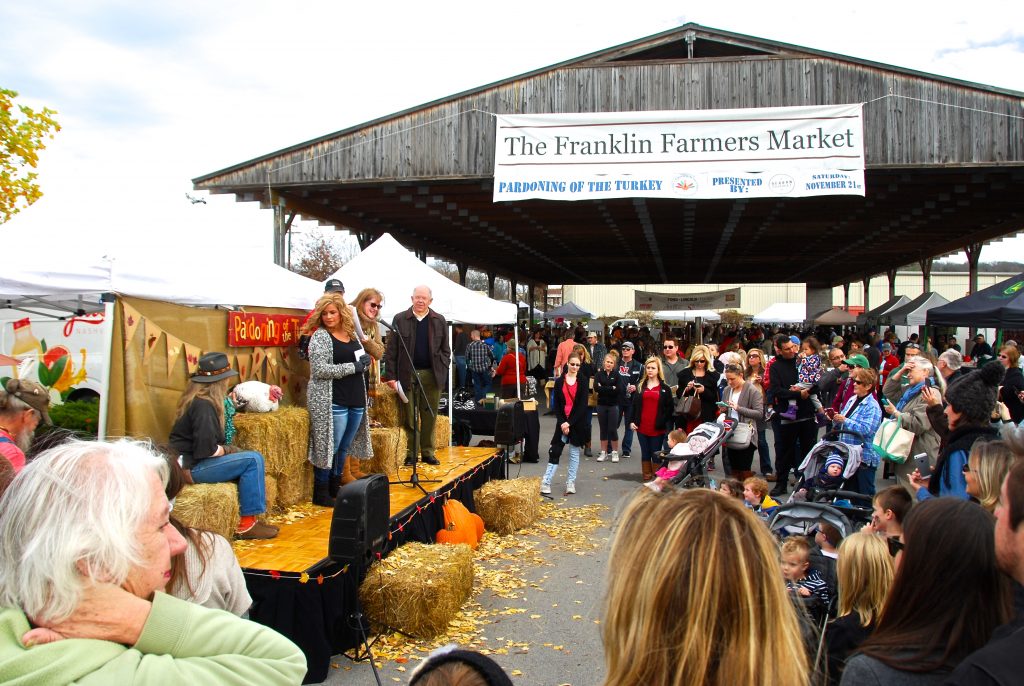 A large crowd gathers each year to see if Danny the Turkey is given a pardon. 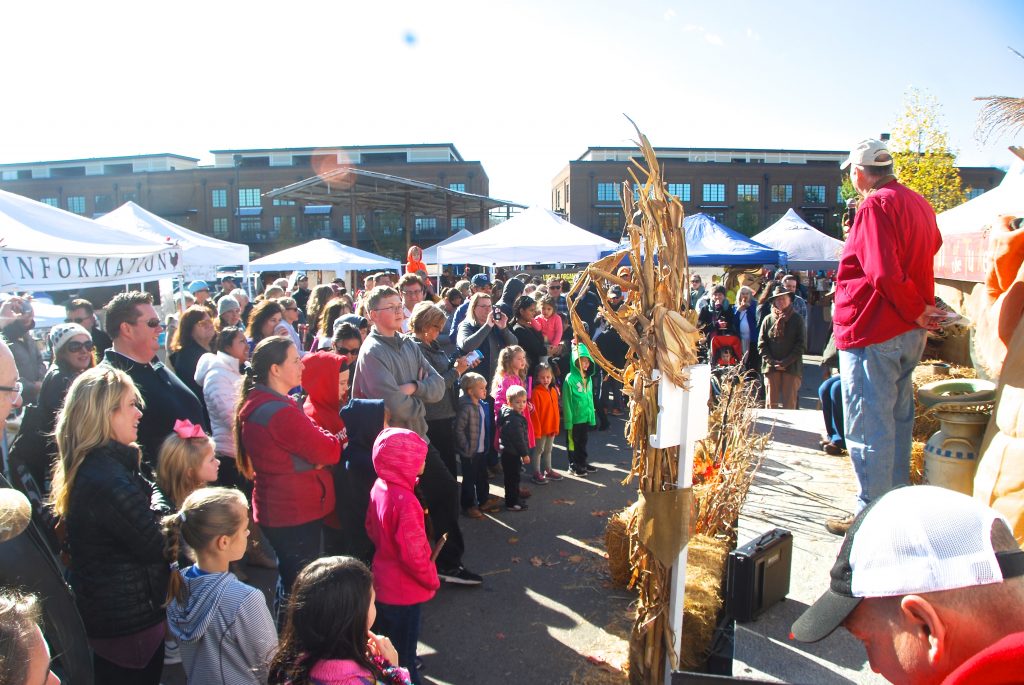 Students at Liberty Elementary School got an October treat on Halloween Day when “Farmer Jon” delivered a trailer full of pumpkins to their school. Jon and Teresa Clarke of Purple Tree Farm in Shelbyville are farmers at the Franklin Farmers Market. Every year they bring their most beautiful and unique pumpkins and mums to the farmers market, and this year they shared their bounty with Liberty Elementary School for their annual Fall Fling. Children in grades 1-4 chose their favorite pumpkin to take home. “Farmer Jon,” as the children lovingly referred to him, grew pumpkins of all sizes, shapes and colors and drove them from his farm in Bedford County. 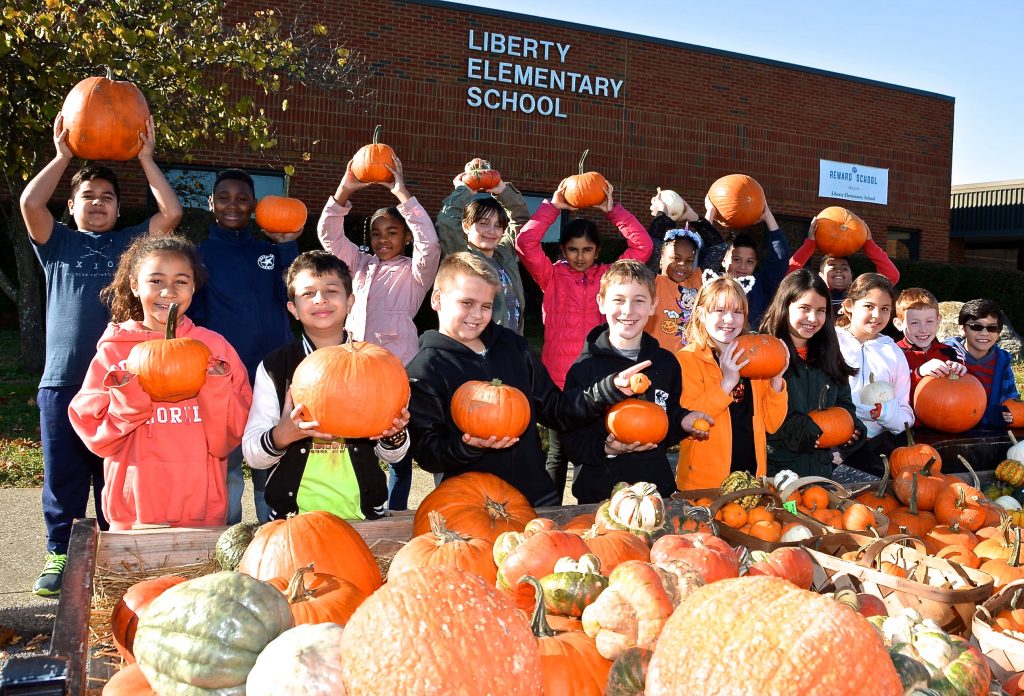 This season has been a wonderful one for TN pumpkin growers. The weather has been just right for the perfect Halloween decoration. Purple Tree Farm owner, Steve Grace and farmers Jon and Teresa grew many varieties that one can only see at the Franklin Farmers Market and not in stores. After the peak market season they were left with pumpkins of all shapes and sizes that did not sell at the market. The neighbor’s cows usually look forward to October’s special treat, but this year Jon wanted to give back to the community that has supported his business for many years at the Franklin Farmers Market, and what better way than to bring his farm to the city of Franklin’s children. 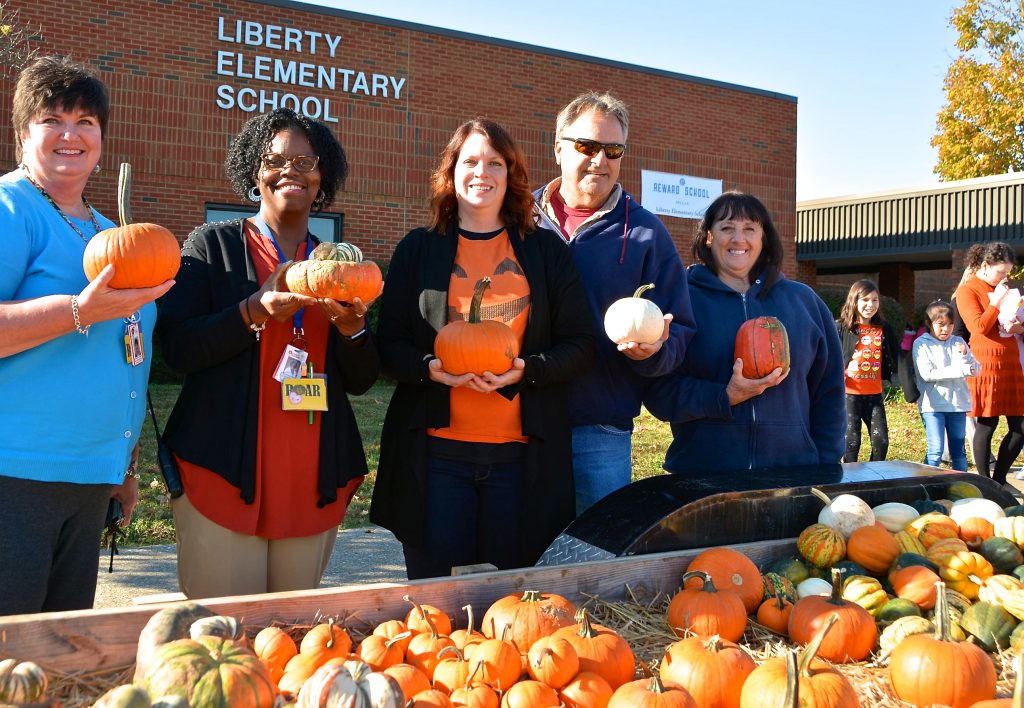 Principal Dr. Cheryl Robey called each class outside to meet their farmer and choose a pumpkin. Turks Turban, a unique heirloom pumpkin, was the choice of many of the happy students. White pumpkins, colorful carnival acorn squash and tiny orange pumpkins that fit in the palm of their hands were the delight of the smaller children. Over 500 children went home with a pumpkin of their choice from Farmer Jon and the school Fall Fling Day was a success. 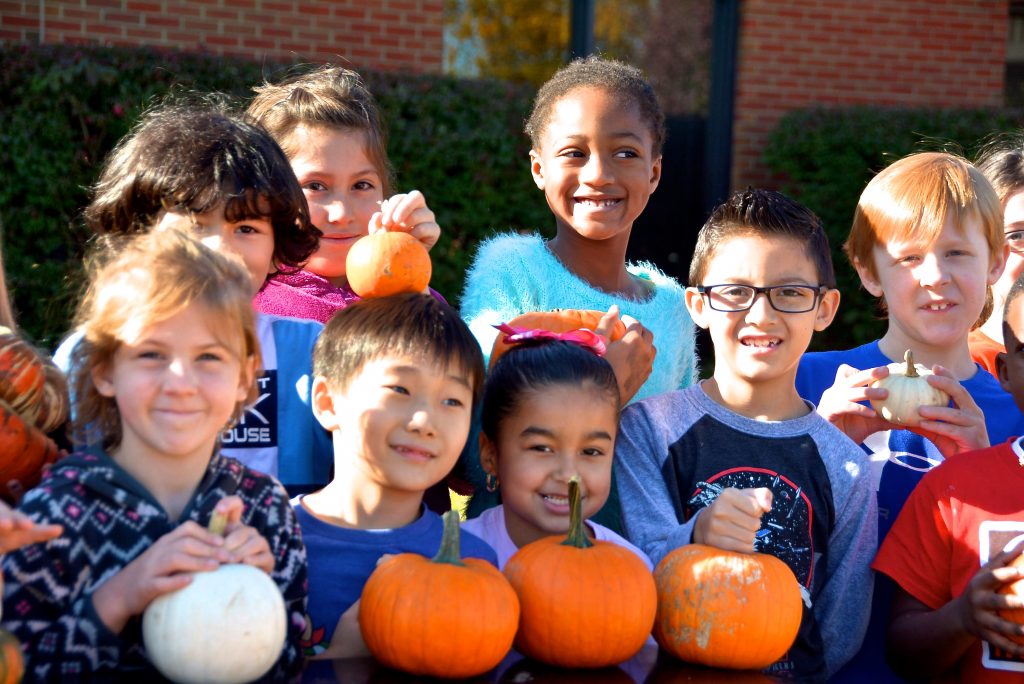 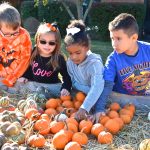 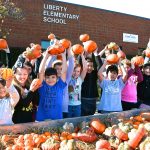 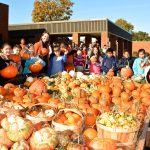 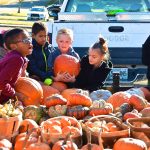